Behind the scenes of the Palace Theatre's $35 million expansion plan 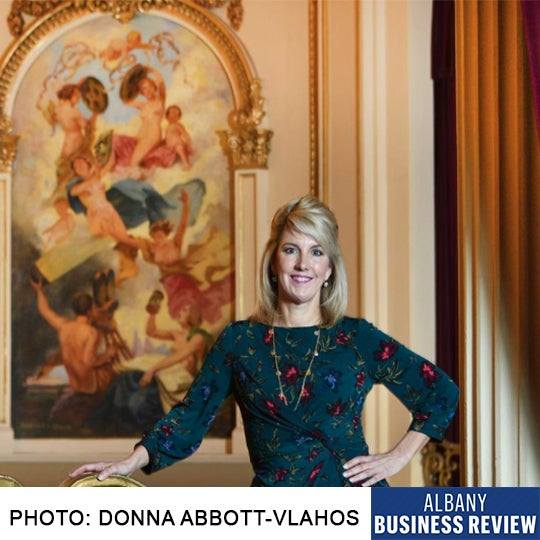 The Palace Theatre in downtown Albany could be getting an expanded lobby, a VIP lounge and a new marquee under a $35 million plan to transform the theater.

Susan Rosko Fogarty, executive director of the Palace Theatre, said the project is expected to start in 2020.

Fogarty was hired in 2017 as executive director of the Palace Theatre to lead its expansion. Fogarty was most recently chief strategy officer of the Capital District YMCA, and before that was a senior vice president and senior relationship manager for Key Private Bank.

The project will come in two phases, with phase one costing around $16 million and phase two at $19 million.

The Palace received two grants from Gov. Andrew Cuomo's Regional Economic Development Council awards — one is for $360,000 and another is for $2.5 million.

The first phase involves expanding the lobby, adding extra bar space, an elevator and a VIP program. Fogarty said the Palace would like to improve its marquee and lighted signage (the current has a green tinge). The Palace is applying for part of the $10 million in Downtown Revitalization Initiative money that the city won toward remaking Clinton Square to pay for the marquee.

"Phase 2 will be the unsexy, but necessary stuff," Fogarty said.
That involves bringing the 1930s theater into the 21st century, which includes expanding the load-in. Fogarty said the current load-in is one-third the height and one-third the width of a modern load-in. They want to redesign it so trucks can pull right up.

The Palace has $4 million in deferred maintenance. That is how Palace Performing Arts Center Inc., the nonprofit that runs the theater, was able to negotiate with the City of Albany to buy the theater for $750,000 over 30 years. Buying the theater was critical for improvement plans.

The renovation project has been toned down since Fogarty has been in charge.
The original $65 million project plans included creating an additional 600-seat theater on North Pearl Street next to the Palace, a video post-production center for editing and sound-mixing, and expanding the theater's stage house, lobby and box office.

"That original $65 million project had a lot going on. They were great ideas and a great aspirational picture," Fogarty said. "There are things in there we could do some day but it was important for us to find something more manageable and find something that excites our customers and contributors."
Last year, the Palace hired its construction management and design team, which includes Gilbane Building Co., a Providence, Rhode Island, company with an office in Albany; Phinney Design Group of Saratoga Springs and DLR Group, which has worked on theaters and performing arts centers around the world.

Fogarty said the project has a large, seven-figure lead gift from an anonymous donor that will be announced when the Palace kicks off its fundraising campaign. The Albany Times Union reported the gift is from a board member.

Palace's board went through some changes at the beginning of 2019, with longtime board chair Alan Goldberg becoming Chairman Emeritus. Steve Baboulis of WNYT NewsChannel 13 is the new board chair. Dr. John Bennet of CDPHP is the vice chair.

The Palace Theatre brings in 150,000 attendees each year to see comedians, musicians and the Albany Symphony Orchestra. It employs more than 100 workers downtown including around 20 full-time employees.