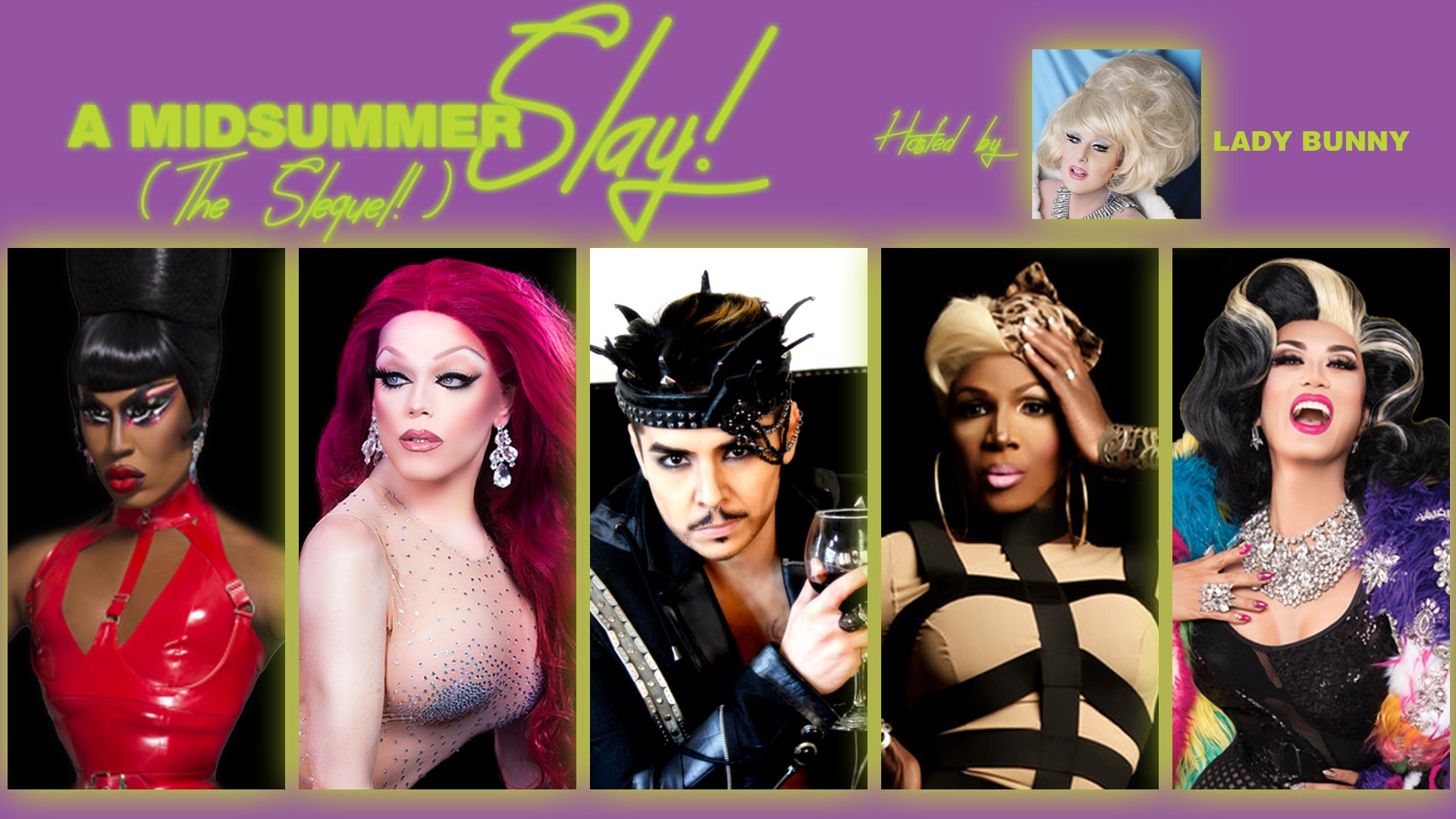 A Midsummer SLAY! (In The Spring) - NEW DATE!

We gave you some last year, and now she’s coming back for more! The night of luscious looks, death-dropping divas, and life-giving lip syncs is returning to the Capital Region’s historic Palace Theatre! A Midsummer SLAY: The Slequel! will be turning it up and turning it out again once the weather gets warm – a Friday evening treat you can’t miss!

Manila Luzon is an international drag queen most famous for her campy twist on glamour, silly cross-eyed expressions, and signature black and blonde wigs. Her tongue-in-cheek style combines humorous themes with elegant fashion; from dresses inspired by cartoon characters to iconic gowns designed after her favorite foods. Manila first competed on the third season of Emmy Award winning, RuPaul’s Drag Race. Her creativity, style and humor paved her way to the end where she finished second place. Manila did not walk away with the crown or cash prize; however she won adoration from viewers across the world who call themselves “Fanilas.”

Shea Couleé is an American drag queen and musician most recognized as a fixture of the Chicago nightlife scene and as a contestant on season 9 of RuPaul's Drag Race. New York Magazine named Couleé one of the top 100 Most Powerful Drag Queens in America in June 2019.

Coco Montrese is an American drag performer, pageant contestant and Las Vegas entertainer. Coco appeared on Season 5 and All Stars 2 of RuPaul's Drag Race. Her time on the show often surrounded her feud with Alyssa Edwards that began before the show's run.

Morgan McMichaels is a consummate performer who knows how to work a crowd and is a favorite among the Southern California drag scene.  Morgan is best known for her chameleon like ability to become anyone she seeks to emulate and is known for her portrayals of Pink, Joan Collins, Boy George, and David Bowie. Morgan competed in Ru Paul’s Drag Race Season 2 and All Stars Season 3, while she did not win either competition, she quickly became a fan favorite known for her sass, competitive nature, talent and authenticity.

Landon Cider is one of the eleven contestants to compete on the third season of The Boulet Brothers' DRAGULA. At the end of Episode 10, Landon won the crown and title of “America’s Next Drag Supermonster.”

With her glitzy outfits, sky-high wigs and false eyelashes long enough to embarrass Tammy Faye Baker, multi-talented drag artist Lady Bunny would turn heads even if looking glamorous was her only talent. But “she” isn’t just another man in a dress: Bunny is a successful comedienne, DJ, actress, singer/songwriter and most famously, the emcee and creator of Wigstock, the outrageous drag festival of drag and music which electrified New Yorkers every Labor Day for over 20 years.

GROUPS SAVE! Discounted ticket prices are available for Groups of 10 or more. For more information or to reserve your group tickets today, call the Group Sales Department at 518-465-3335 ext. 128