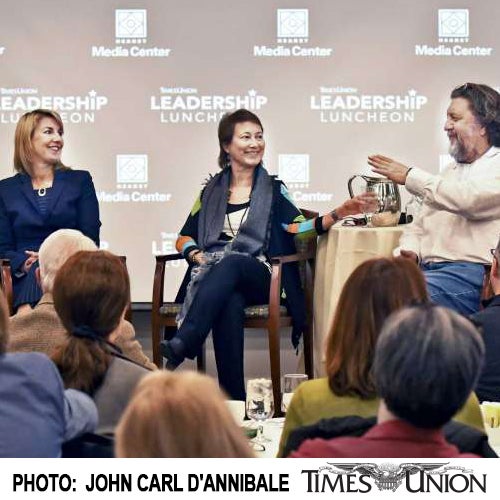 How does the digital age affect the performing arts? What can the Capital Region do to encourage artistic development in the community? What would P.T. Barnum do today to draw audiences to live performances?

The leaders of some of the Capital Region's premier performing arts organizations discussed these questions Wednesday at the Hearst Media Center during a panel moderated by Times Union editor Rex Smith. The event is part of the Times Union Leadership Luncheon series, a monthly discussion with community leaders and business executives about issues affecting the Capital Region.

Panelists emphasized the unique experience of attending a live performance surrounded by members of their community — "You sense that human desire for connection," said Elizabeth Sobol, president and CEO of Saratoga Performing Arts Center — while highlighting the advantages and challenges technology poses for the industry.

Sobol and Fogarty expressed concerns about arts education in schools and how "digital everything" affects children's receptivity to art forms, but also noted that technology has also helped expose more young people to the performing arts. All three organizations have prioritized offering programs and events that provide artistic opportunities for the next generation.

"We have to decide as a culture and as a region to support the arts through this time when there are a lot of other distractions," Fogarty said.

Some might be nostalgic over "losing the piano," Morris said, referring to the presence of the instrument in families' homes. But people are continuously creating, making and performing things that reflect the "human effort at expressing personal need, joy and beauty," and "we can honor their linkage," he said.

Asked what the Capital Region could do to support the creative economy , each panelist had a different answer. Sobol encouraged the audience to view the area through a newcomer's eyes, as she had when she moved to the area to lead SPAC, because "there's no place in North America like this region."

If someone is debating whether to spend the money to attend a live performance, "try it," Fogarty said. Schenectady and Saratoga Springs have been transformed by Proctors and SPAC and "Albany needs to be next," she said.

Morris suggested an event similar to South by Southwest, a festival in Texas, that would focus on climate change and combine engineers and creatives.

"We ought to be talking about the future of the planet in a way that involves what we do best: science and art," he said.