Play For The Palace - An Evening with moe. to Benefit the Palace 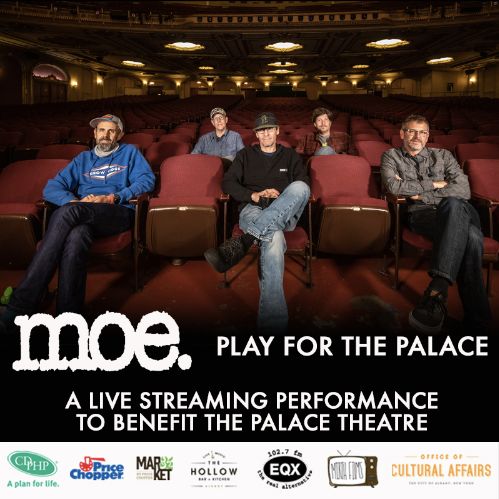 We set up in the lobby of one of our favorite venues, the Palace Theatre in Albany, NY, during rehearsals for our Fall Drive-in Tour and recorded the whole thing. Along with our playthrough of Not Normal, we recorded a full 2 set show that will premiere on December 11.

The arts have been severely impacted by the COVID-19 venue closures and historic theatres like the Palace Theatre need help! Join us on Friday, December 11 at 8:30PM for a special performance by moe. to benefit the Palace Theatre.

A portion of all proceeds will be donated to the Palace Theatre.

About moe.:
Hailed by American Songwriter for their “mind-bending musicality,” moe. is treasured for their mesmerizing musical synergy, unfettered showmanship, and smart, resonant songcraft. For three decades, the band has corralled myriad musical forms on a truly original journey rich with crafty, clever songwriting and astonishing resourcefulness. Fueled by an impassioned fan base, moe. has spent much of those thirty years on the road, encompassing countless live performances marked by eclectic wit, deep friendship, and exploratory invention. Having built an enduring legacy with hard work and a confirmed commitment to creativity and community, moe. seem as surprised as anyone to find themselves at such a significant landmark.

About the Palace Theatre:
The Palace has been Albany’s iconic downtown landmark for the past eight decades, bringing the biggest names in entertainment to the Capital Region. The history and programming of the Palace is a unique and often untold story with roots dating back to the period of the Great Depression. The Palace Theatre, built in 1931, originally presented vaudeville acts, feature films and became a civic auditorium before closing its doors in 1969. The theatre maintains its original beauty and design and is a historical landmark in the City of Albany. The Palace Performing Arts Center was established in 1984 and incorporated as a nonprofit organization in 1989, created to operate the Palace Theatre. The mission of the Palace is to bring world-class arts and entertainment to New York’s Capital Region, greatly enhancing the area's cultural and economic development. Our mission is carried out through core programming and community initiatives that include performing arts entertainment, free arts education, family-friendly performances, free summer movies and a classic movie program series. The Palace has a significant economic footprint with over $3.5 million in ticket sales and 180,000 patrons.