In partnership with the City of Albany and other program partners the Cash for Coats benefit concert will collect donations to purchase new winter clothing items for Albany kids in need. 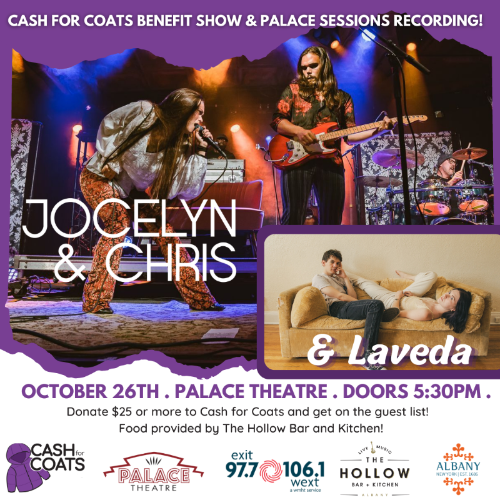 The City of Albany, the Palace Theatre and Cash for Coats program partners announced details for the Cash for Coats Benefit Concert at the Palace Theatre on October 26th.  Billboard Triple A Top 40 Artist Jocelyn & Chris will be performing a special set along with special guests Laveda. The concert will be recorded and aired as an upcoming episode of the award winning Palace Sessions video series in collaboration with Mirth Films.  Food will be provided for guests by The Hollow Bar and Kitchen. In order to get to see this great show in person patrons will need to make a donation to the Cash for Coats program over $25 to be added to the guest list. Space is limited. Masks are required when attending this event.

Monetary donations over $25 are required to get on the guest list.
Donations may be made by:

Hailing from NY, indie dream pop/rock outfit genre blending project, Laveda set nostalgic and cinematic moods with a 90's-esque reverberated guitar driven sound reminiscent of The Sundays or My Bloody Valentine. Despite the common tropes of the shoegaze revival movement, Laveda are able to maintain polished pop vocal performances similar to that of Billie Eilish. Founding members Ali and Jake voice the concerns of today’s younger generation in their song, Better Now and say that this is the main theme throughout their debut record “What Happens After”.  The band has played extensively in and around the New England/NYC area and completed a full Northeastern US/Canada tour in summer 2019.

Over the years, the Cash for Coats program has distributed tens of thousands of new winter clothing items to Albany schoolchildren. Lodge’s offers a significant discount on any items purchased for the Cash for Coats Drive, maximizing the impact of each cash donation. The Cash for Coats Drive is sponsored by City of Albany, The Palace Theatre, Lodge’s Department Store, United Way, Burke Companies, The City School District of Albany, Elks Lodge #49, Ophthalmic Plastic Surgery, Mirth Films, Live Sound, Exit 97.7 and The Hollow Bar and Kitchen

For more information on Cash for Coats, visit www.albanyevents.org